Yoga PH.D. or "The Best Yoga Book I Have Ever Read"

I love to read... so you would think that as soon as I was introduced to yoga almost 8 years ago that I would have consumed each and every yoga book out there.

Unfortunately, after a few forays into the yoga book world I was left feeling disgruntled and frustrated. I soon realized that the majority of yoga books are either extremely fouffy and poorly written, highly impractical and pseudo pop psychology-esque or based on hindu religious theory.

I want to take yoga seriously and have no interest or time to read something that is filled with run-on sentences and spiritual fluffiness. Thankfully, for a long time, yoga blogs filled the void of learning and growing in a platform where I could choose what fluff to read. One of the more academic blogs that I discovered and enjoyed was Carol Horton's "Think Body Electric". 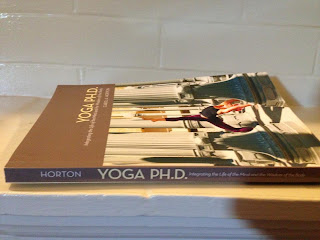 Soon I heard that she had written a book: "Yoga Ph.D." by Carol Horton, or "The Best Yoga Book I Have Ever Read". I know that is a pretty darn grandiose statement, but I mean it. And here's why:


Yoga PH.D: Integrating the Life of the Mind and the Wisdom of the Body
By Carol A. Horton, 2012 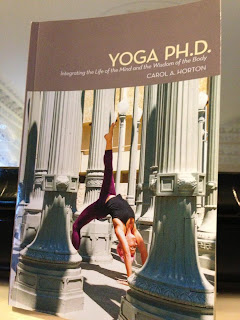 Firstly, Yoga Ph.D. is far from the fouffy, pseudo-spirituality that has pervaded the yoga literature. It's written from the perspective of someone entrenched in academia, scientifically minded and used to crafting her writing in an organized and concise manner. As a result, it's an absolute dream to read.

Although the book starts heavy on the personal reflections and autobiographical, Carol quickly moves through a natural progression of historical origins of yoga the discipline, her analysis and reflections of why yoga resonates with so many people today and the sociological and cultural influence of contemporary yoga. Carol also discusses various modern yoga questions such as student/teacher relationship, pseudo-spirituality, our relationship with food and the commodification of self and how this relates in the yoga world.

More than the rich topics of discussion, it's Carol's style of open, honest writing combined with critical thinking that I absolutely fell in love with.

Throughout the book, although she doesn't shy away from critically examining yoga culture and history, Carol is careful to phrase and present her observations and views in a manner that accepts differing perspectives and the possibility for new research and discussion offering alternatives to her postulations. Reading through Yoga PH.D. I felt as if I, the reader, were part of a dialogue with Carol herself; one where she respected my thoughts, ideas and own experiences.

Finally, similarly to her ideas and posts on "Think Body Electric", Carol openly embraces yoga's potential for growth and change. In fact, it was refreshing to read how and why she views the current changing face of yoga as something potentially good. Her arguments for why we should embrace a generative and creative yoga discipline over holding staunchly to tradition is challenging and has forever changed how I view our current yoga culture.

A slight bémol on "Yoga PH.D." was the literacy level. Her very style of writing, academically and succinctly, that I absolutely loved personally, I would say may prove to be a barrier for some readers. I've always been a firm believer of the accessibility of ideas for all, no matter the educational level. Unfortunately, becoming accustomed to a more academic style of writing and vocabulary can be difficult, especially with discipline specific (i.e. political science and sociology) terminology.

That said, Yoga PH.D. is a must have (in my honest opinion) for the yogi's bookshelf.

(I'd like to thank Roseanne Harvey and Carol Horton for hosting a "Yoga PH.D." book giveaway on Roseanne's blog "It's all yoga, baby"- otherwise I may never have had the fortune of discovering my favourite yoga book of all time! Thank you!)
Posted by Eco Yogini at 6:26 PM