When I first met Andrew, he was using 'Got2Be' hair gel that created these scary, weapon-esque straight up spikes that you could barely touch. With a bit of help, he's now a pro at managing his beautiful hair using mostly Aveda stuff (to my chagrin and our pocket book).

A few weeks ago I had this random thought: "What if I could DIY some hair pomade using beeswax?" Almost too crunchy, I figured I'd give it a try for fun, with almost no expectations that a) it would work, or b) that Andrew would even like it...

I bought some beeswax at the market and attempted to google a recipe. I only found one with measurements and I decided it was too complicated really. So- I figured I'd wing it from other blog posts and reading I had done.

I can barely believe it, but it actually works! And quite fabulously if I do say so myself. Although it sounds pretty darn crunchy to make your own hair pomade, it's cheap, easy to make and has three ingredients. So why not? Ladies- you could totally use this as well, if you'd like less 'waxy-ness' and just a  bit of a hold, just replace more of the beeswax for oil. 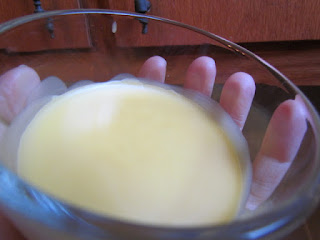 (The finished beeswax product in a small anchor glass container. It smells slightly like clove and coconut oil!)


DIY Beeswax Hair Pomade (makes about 1/4 cup ish).
(I apologize, but honestly I didn't write anything down, since I was sorta just going by feel. It's kinda how I role typically, but drives Andrew bonkers. It also demonstrates that you can totally adjust to what you feel would be best for what you want in the consistency).

Equipment:
Double boiler (or a fake-out double boiler using a pot with about 2 inches and a metal bowl. Just be aware that the beeswax is a little tricky-but not impossible- to clean out).
A shallow glass jar
A metal spoon
A digital scale (or... you could probably guesstimate in tablespoons)

Ingredients:
0.6 oz of beeswax (update: Andrew prefers a more waxy hold- we now use 1 ounce of beeswax)
4 teaspoons of unrefined coconut oil
clove essential oil to scenting preference (or another essential oil that makes you happy)

(UPDATE: Many of you are asking about how to change the consistency of the recipe- it's easy! Just add more coconut oil if you want it more malleable or more beeswax if you want it harder. I have remelted a batch and added more beeswax after Andrew tried it and gave me some feedback. Remelting wasn't difficult, if it's already in the glass jar it should pop out easily, but if it doesn't just use a hair dryer to melt the edges and pop it back into the double boiler. Don't be afraid to play around with the recipe until you get something that works for you!) 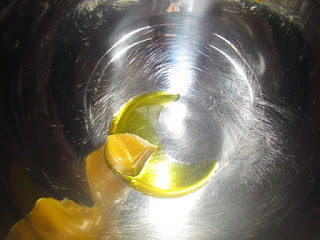 (the beeswax melting away in our fake out double boiler! With the help of hot water, dish detergent and a hard scrubby the wax was gone without too much effort)

Done! And it only took about 20min from start to cooling!

To Use:
This recipe makes quite a hard consistency (which actually perfectly matches Andrew's current pomade or clay preference). So- using your fingernail (or spoon) scrape off about pea-sized amount and work into your fingers. 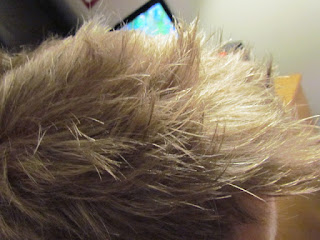 (Andrew's hair at 8:20pm after a full day of wearing the beeswax pomade- perfect! And he notes that it demonstrates his need for a haircut lol)

Performance:
After a full day of having it in his hair, it looks fantastic and hasn't moved (without being stiff or weird looking). Even walking in the windy city that is Halifax hasn't had an effect. We don't expect that much difficulty with the shampooing, as most pomades have a wax as part of their recipe.

**Post shower update: Andrew had ZERO difficulties washing the pomade out of his hair- and is now a daily, under a 1$, delicious smelling, 3 ingredient beeswax pomade convert. Success!

No more chemical-filled, pricey pomade/clays for us!

article and photographs copyright of EcoYogini at ecoyogini.blogspot.com
Posted by Eco Yogini at 8:24 PM