Selling Yoga; The Trends that Define our Culture

Body Image issues. It's an old story really. Lately there's been a lot of talk about how women are used by the media to sell yoga (svasti's awesome post and Roseanne's discussion). A post over at "Eat the damn cake" reminded me that this is so much more than warping a spiritual practice into something marketable. It's an example of a media and social epidemic that yoga is definitely not immune.


As Kate reminded me over at "Eat the damn cake", brides are hyper targeted when it comes to the beauty industry. Most images of brides online are perfectly shaped, proportioned and flawlessly beautiful. There's unending talk of "being a princess on your special day", makeup choices, hair choices, facials and such bullsh*t. I have been feeling the pressure. Usually I never agonize about makeup, but lately I've been considering paying for a trial makeup run. You know, for my perfect day. gag.

This discussion around Tara Stiles and the Toesox ad really is indicative of a very important and relevant societal norm that has been chipping away at 50% of the North American population since the advent of popular advertising. Instead of focusing on the narrow category of Yoga, we should be looking at why the use of women as objects in the media is effective.


The advertising industry is a billion dollar industry for a reason; it works. By showing us images of a unrealistic beauty ideal, the media helps support a population of women and young girls who are not happy with how they look. This ideal has changed over the past 100 years, from the flat chested flappers in the 30's, to the voluptuous size 15 Marilyn Monroe to shift from Twiggy thin to Barbie boob-waste ratio. The point is that there really isn't all that much research out there supporting the current beauty "ideal" as some genetic driving force. (most evolutionary psychology studies are shaky at best when it comes to supporting the big boobs-small waste= cave man natural selection theory). 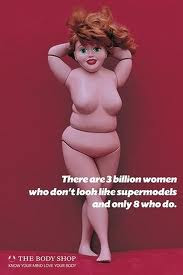 Although I don't shop at Body Shop (ew chemicals) I love this ad.

The majority, if not all, of female oriented activities and hobbies are inundated with media manipulation and beauty ideal messages. This includes currently perceived physical activities such as ballet and gymnastics. You don't see a lot of thin, waif-like female hockey player messages... because hockey still fits in the acceptable "male" sport.

The fact that yoga is now being co-opted by large advertising corporations and used in such a disgusting manner is just another piece of the media and body image culture of malcontent that all women in North America experience. Because Yoga is, for the most part, a female dominated activity here in Canada and the US, and the advertising industry knows it.


You don't think you're influenced by ads, you say? Well, lets just assume that a billion dollar industry really has invested poorly. We see on average hundreds of ads in our day, with a large proportion having messages on beauty. My generation has grown up on television ads and have had clear messages on what girls and women should and shouldn't look like from an extremely young age.

According to the National Eating Disorders Information Centre (NEDIC), 37% of grade 9 and 40% of grade 10 girls considered themselves too fat, this during a time when most girls are going through puberty with their bodies changing naturally and in a healthy manner (Boyce, King, Roy 2008). More than 50% of girls and 33% of boys engaged in unhealthy weight control behaviour (binge eating, laxatives, skipping meals, vomiting etc) as found in a national study of 5000 teens (Project EAT). 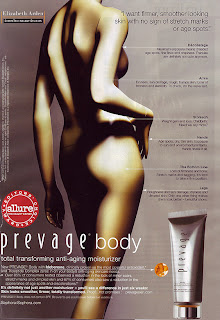 This ad not only comments on trying to stave off aging... a natural beautiful part of life, but shows a thin, obviously young to start with model. Which we can't see her head. But wait, is it really a human being??? or..... a mannequin. Not even human at all. So besides the unrealistic ideal, cutting off the head, we have a plastic, fake ideal to live up to. Awesome.

10 women to every man is diagnosed with an eating disorder. Eating disorders have the highest rate of mortality (10%) of all psychiatric disorders. Body dissatisfaction and unhealthy weight management have been found to predict later physical and mental health difficulties including both weight gain and/or eating disorders (La Grange & Loeb 2007). (please check out NEDIC for more information). 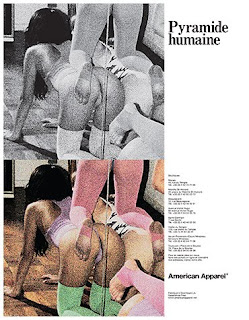 American Apparel ad... not only using body parts to sell clothing (that we can barely see I might add), but these girls look young. Most American Apparel models are sexualized and extremely young looking.
What Tara Stiles ad for "Slim Calm Sexy Yoga" follows is a basic trend in the media to propagate a feeling of unease and unhealth towards our bodies and our eating habits. Have you noticed an increase in "yoga enhancing vitamins" lately? Like a synthetic boost for our physical practice is really the point of yoga. Tara's book, like other damaging media advertising, has a basic message:

- Everyone can be thin if you just try hard enough (which is genetically false)
- Only thin female bodies are beautiful and attractive (so not true)
- If you're thin you'll be happy, confident, successful and healthy (I know a lot of thin and unhealthy, unhappy women and a lot of confident, voluptuous healthy happy women... how about you? Are only the thin women you know happy and healthy?).
- You can't and *shouldn't* be happy with yourself until you physically externally meet the ideal.


Instead of an assault towards Yoga itself, we can use it as a wake up call to say "enough!".

How can we support a more healthy and positive approach to how women are used in the media?

Finally, take a step back and critically look at how women are used to sell objects in the media. What message does a female headless torso send to young girls about their growing body as an object? Celebrate your beauty and your yoga practice. Without competition and with self-love.

I'm taking a cue from Eat the damn cake and finishing with an "unroast":

I love how practicing yoga makes me feel calm and grounded. Regardless of what I'm wearing or how "well" I practiced.

article copyright of EcoYogini at ecoyogini.blogspot.com
Posted by Eco Yogini at 9:42 PM