Remember my "DIY coconut oil" moisturizer?" I thought it would be the end of store bought moisturizer for life.

I was so stubborn I went TWO weeks thinking my skin would eventually get better with this two ingredient regime. Everyone has coconut oil as their cure all for eczema, so of course this will work! It's friggin' oil for frack sakes- it should be uber moisturizing!

After two weeks with patches of scary red, blotchy skin appearing all over my body and feeling itchy for all my awake hours (and waking up to having scratched in my sleep), I gave up and purchased Green Beaver's Après Ski with Calendula.

A slight improvement, but months have passed and I'm still suffering from dry patches and itchiness.

Last night, I decided that I was going to try making my own Calendula body lotion. Why not? I had some cocoa butter, unrefined coconut oil and I could just buy Calendula right? Whatever it is really, an herb or something. I'd just go to the Health Food store (Planet Organic) and search the herb section until I saw "Calendula" and whatever form that was I would buy some. (according to wikipedia, Calendula has been documented to decrease inflammation).

It's a yellow flower.

So, weirdly enough there wasn't any sort of "make your own Calendula, cocoa butter, coconut oil lotion" recipe online. Oh, there were plenty of various lotion recipes, but all had random ingredients I didn't own, or involved processes that were too time consuming. So I kinda decided to just wing it, take a few different recipes and see what happened.

What happened was that I made an oily body lotion that I used today. For the first time in MONTHS I am red blotchy, scratching and itchiness FREE!! No seriously, and I am almost a little shocked here, it actually worked. And it smells absolutely divine and wasn't that difficult. 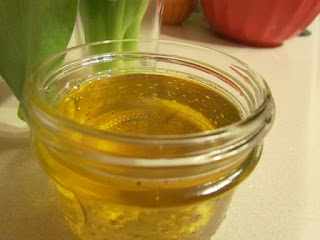 My lotion immediately after poured into the mason jar last night!

Hardware: a double boiler (or makeshift one. I had to google what that was... cuz Andrew wasn't around for me to confirm that it's a large pot, with a metal bowl that sits on top but doesn't touch the water in the pot. In case there are other noobs reading this and not just me lol).
a small pot
a metal tablespoon
a mason jar (or glass container)
a mesh strainer
Optional: probe thermometer (it was handy) 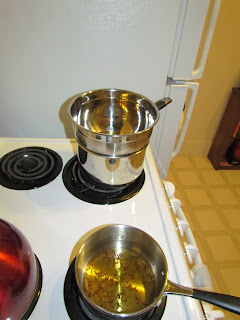 My double boiler and infusing oil!
Directions:
- In a small pot mix the jojoba and olive oil (honestly I just squirted what I thought was about an ounce each)
- Add the Calendula petals (I mushed them in a mortal to release some of the oils first).
- Heat the oil at low-medium, or so it's 170F (this is where the probe thermometer came in handy and I realized it was at 240F!!)
- Let sit for 20min at about that temperature. 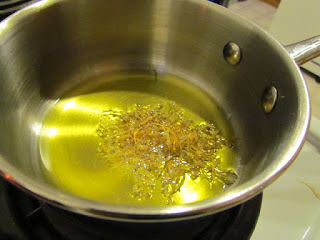 - Heat the cocoa butter in the microwave for about 35 seconds or until soft. (This was weird since it had been sooo long since I had heated anything plastic in the microwave. It felt wrong).
- In the metal bowl you'll use for the double boiler, add the coconut oil and cocoa butter. Bring water in the pot to a simmer (um, yup had to google simmer vs boil) and then place bowl with oils on top and melt.
- Once the Calendula is infused for 20min, strain the oil into the double boiler. Mix and pour the entire mixture into the mason jar. Allow to sit until at room temperature until hardens.

I really wanted to try it today, so I put it in the fridge overnight. The problem with that is it was rock solid in the morning and I had to heat it up again.

It smells absolutely delicious (even though the Calendula is STINKY while infusing). 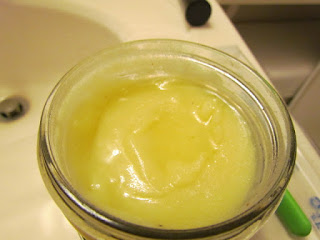 The lotion tonight after being at room temperature all day. You can see it's a bit like vanilla pudding looking, but it actually separates as soon as you touch it. I might keep it in the fridge...

Some thoughts- the oils do separate and get a bit goopy, which is awkward to manage. Also, although it has worked miraculously, it takes a LONG time to absorb and is extremely oily. More so than the coconut oil alone. I had to get ready (do my hair and makeup etc) with minimal clothing and I even used a towel to pat some of it up. But it wasn't long that my skin soaked it up and no residue was left on my clothing!

That said- this is totally doable with basic ingredients and about an hour of your time. The stuff supposedly should last up to 4 months, or even longer if you put it in the fridge.

article copyright of EcoYogini at ecoyogini.blogspot.com