If you aren't from the Canadian Maritimes then you *may* have seen the photos of the ridiculous amounts of snow and storm after storm (#stormchips !!!) we got in February. Perhaps, if you are the states, you may have seen a news shot of some snow in Prince Edward Island with the tagline "Prince Edward Island, ONTARIO"....

Just in case- PEI is not in Ontario, they are separate provinces (our equivalents to a "state") and one is an ISLAND. And Canada is not in fact referred to now as the country of "Ontario". Rant over.

Anyhoo, regardless it has been cold and snowy and dismal. Last night, the night before leaving for a three day work trip to even colder Cape Breton, that I ran out of body butter.

OMG I am OUT of body butter *screams internally while waving arms in a panic*.

So, despite the fact that I accidentally picked up and BOUGHT the tester for cocoa butter, I decided that desperate times called for throwing caution in the wind (and really, it looked like it was just opened so people could sniff the delicious chocolate-y goodness, and we live in Halifax where people aren't crazy so.... I felt pretty safe).

I realized as I was throwing the ingredients together frantically that I've adjusted or maybe "pro-tipped" my original recipe over time to make it faster and more efficient. And of course I thought I could share it with you! This recipe has less ingredients (cuz who can afford to buy cocoa butter AND shea butter these days??), takes about an hour start to finish and has some definite body butter tips. Enjoy! 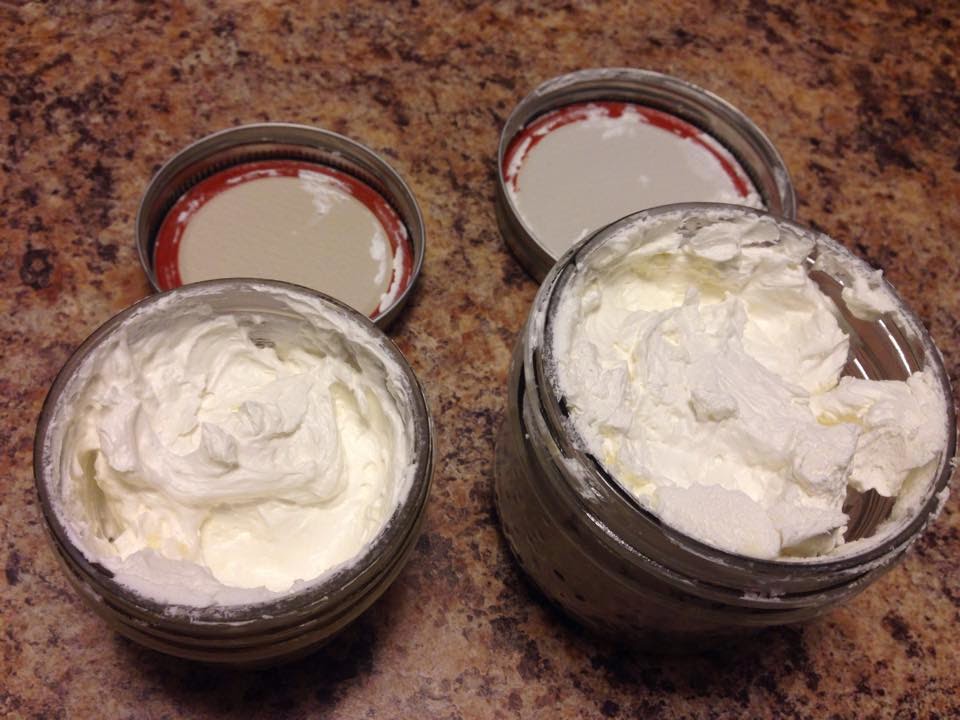 *EO Note: For stronger scents like peppermint or anise, less is probably good. I used orange this time and found it needed at least 23 drops for it to smell like those Yulemas time chocolate oranges. I suggest trying 10-15 and cautiously taking a smell to decide whether you need more. There are health cautions with using EOs- please look into it if you have any health conditions (or are pregnant).
*Castor oil: I added this oil since I had it already for making soap and it's "extra softening". So far, I love the tiny bit of extra silky smooth it's had for my skin!


Place stand mixer bowl in the fridge to cool while you're melting the oils. (This will help speed up the cooling process that takes the biggest chunk of time).

In a double boiler (or pot with 2 inches of water and a stainless steel bowl on top) add all the oils. Keep the heat at medium so you don't over heat or boil over. Once melted, add essential oils.

Pour oil mixture into the chilled stand mixer bowl and place in the freezer. Let chill until the oils harden to roughly an inch ring around the edge and pudding-y type texture in the middle. This may actually take 20-30min, depending on your freezer temperature. That said, the already chilled bowl AND using the freezer instead of the fridge shave off about 15-20min of wait time.

Scrape away the sides of the congealed oils using a spoon before starting to whip. Set standmixer to the highest setting (make sure you have the shield in place since the oils fly everywhere) and let'er rip for about 5-8min. If it was cold enough, the oils should quickly form white fluffy peaks but continue whipping (it's not like whipped cream, you won't "break" it). Continued whipping allows for more oxygen to enter the body butter and makes for a more creamy, melt in your hand while keeping the "whip" shape.

Halfway through whipping, slow to a stop the mixing and scrape the sides to make sure no congealed oils are missing the attachment. Start'er up again.

Once done, scoop out into 1 cup mason jars. This recipe makes about two to two and a half cups. Store one in the fridge. If you live in a hot/warm climate or home you might want to store them both. For myself, even in the summer, as long as it's out of the sun it doesn't melt.

WHERE TO PURCHASE INGREDIENTS
In Halifax: I buy the cocoa butter and castor oil at Petes Frootique. So far it's the cheapest place I've found, but if you know of somewhere cheaper, let me know!
You can also purchase sweet almond oil and coconut oil at Petes, but some Superstores and Sobeys also carry it, and it's usually cheaper there.

Outside of Halifax: Most natural food stores carry these ingredients. Or you could order them online... although I am unsure it would be worth the shipping at that point.