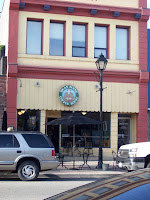 This post is part of Fight Back Fridays! Hosted by Food Renegade- please go check out all the other fantastic REAL FOOD posts over here!

Starbucks and Lululemon... does anyone else see a trend here? Since the beginning of my yoga journey, five years ago in Montreal, Lululemon and Starbucks were close behind. Late nights studying for my grad degree required lots and lots of coffee, and boy do I LOVE mochas. It was so common to see yogini's decked out in Lulu gear while sipping on their starbucks that it just seems like the two companies should be somehow in cahoots together. In Montreal we used to always always stop for a Starbucks pre-yoga with Jim (dreamy Brit instructor at the Y). (The Bean Scene, my favourite coffee shop in Vernon BC)

Most of us know that coffee is "bad" for us, that most likely huge corporations like Starbucks make a zillion dollars in profit at the expense of the little guys... but did you know just HOW much your latte is costing our planet and it's people? The USA consumes one fifth of the world's coffee, making North America the largest coffee consumer in the world. You would think with such a huge demand that setting up your very own coffee field and becoming a coffee bean farmer would be a worth while venture... Unfortunately coffee farmers have been, and continue to be exploited to the point of slavery. Coffee farmers are often paid less than 50 cents per pound and live in appalling conditions, are indebted to the point of working for nothing.
Coffee beans are grown in countries that typically have delicate rainforests and unique, essential ecosystems. According to the National Resources Defense Council reports that deforestation is a huge part of "sun grown" coffee (40% of coffee growing lands in Columbia, Mexico, Central America and the Carribean; where deforestation takes place for "monocultures" of coffee bean plants) and the World Wildlife Fund reports endangered species habitats are being destroyed by illegal deforestation for coffee plantations along with a 90% drop in migratory bird species.
Want some DDT with that latte? Although measures have been taken to ban many (but not even close to all) pesticides in North America, many coffee beans purchased today are grown in countries where such carcinogenic pesticides are still permitted. For example, NRDC also reports that Costa Rica allows the use of the toxic insecticide chlordane that has serious health and lasting environmental impact. Chronic, dangerous pesticide use also erodes the coffee farmer and their communities drinking water safety, soil health and food safety. Discharges from coffee processing plants have been a major source of river pollution in Latin America, releasing thousands of tons of organic waste into the water systems, clogging up the water ways and decreasing oxygen supplies of the local aquatic wildlife (NRDC).
Of course these environmental concerns are only the beginning of the coffee empire. Huge corporations such as Starbucks (who buy coffee beans at "slave" prices, followed by an almost 200% markup to us, the North American consumers), also ship these beans to roasting plants, emitting huge amounts of carbon into the atmosphere. Followed by the energy needed to roast the millions of pounds of coffee beans and finished with beautiful plastic packages that are shipped all over the world for another bunch of carbon emissions.

I knew all this, I did. The kicker, was a documentary called "Strong Coffee: The Story of Cafe Femenino" that I was invited to watch by my friend Sharyn in B.C. It has changed how I view my coffee and being the sap that I am, it also made me cry. (I strongly urge you to check our the Trailor here).
Cafe Fememino tells the story of the women in these coffee communities who are marginalized, continue to have no rights, are not educated, are abused and are treated as subhuman. Despite progress made by Fair Trade organizations, the women in these communities (50% of the population... don't forget!) continued to be abused and were without basic human rights. With limited resources farmers invested money in educating their sons, daughters stayed home and were married between the ages of 12 and 16 years.

In 2004, 464 female coffee workers banded together, and with some support decided to separate their coffee from others. The label requires that coffee be grown, sold and the land owned, by women. That they be paid above fair trade prices, that the coffee be grown sustainably and organically and that the women have humane and improved working conditions. (Cafe Femenino bean bags are tied with a pink ribbon!)
Finally, buying Cafe Femenino also means supporting a local woman's organization in YOUR community. Coffee roasters that agree to carry the Cafe Fememino label are bound by contract to donate 2% of their profits to a local woman's program of their choice and must have the Cafe Femenino label on their packaging. A true pay it forward- women in third world countries decided that other women elsewhere would benefit from their hard work and commitment to make our world a better place. 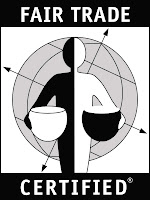 Although I began this post with the purpose of talking about mostly Starbucks... the story of why buying locally roasted, organically grown, fair trade certified coffee is an essential backdrop and took up quite a lot of space.
My options were to either find an alternative or quit drinking mochas. Quit?? Lol, one day without my one cup and I have a headache (sad I know).
Obviously, certified organic coffee is a fantastic way to assure a mocha sans pesticide residue and decrease your latte's impact on our precious blue planet. Fair Trade certified also assures that the yummy coffee you are drinking isn't supporting "slave" labour. However, having one does not automatically assume the other. So both was a must for myself.
Buying certified shade grown coffee assures that those "sun", monoculture, bird-killer fields are not involved and that you are supporting a return in biodiversity. Of course, my absolute favourite... Cafe Fememino, certified fair trade, organic and a pay it forward to support women in MY community from a local roasting company. How do you find such a fantastically awsome tasting and ethical coffee??
Well, in Halifax "Just Us!" (a Wolfville fair trade, organic coffee roasting company) claims to carry Cafe Femenino. However, recently I have been having a difficult time finding it in their Coffee shops. They've never promoted it and it seems to have quietly disappeared from their shelves. I'll be writing them soon to find out the latest.
Otherwise, go on Cafe Femenino's website here, and search by company and region. Currently, Canada has not implemented their Certified Organic Logo (federal website states June 30th 2009), so make sure to closely examine logos when purchasing, logo copiers are out there!
Next stop: Starbucks and my love-hate relationship :)
Blessings and happy ethical coffee drinking!
Posted by Eco Yogini at 3:14 PM